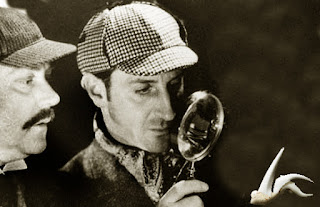 Everyone loves a good mystery, right?

Last year I mentioned (when it first happened) that I was experiencing a strange anomaly in my kiln: Cone 11 was melting faster than cone 10. Of course, it was then falling into cone 10 and keeping it from melting properly.
This happened in both the top and bottom cone plaques. It had never happened before, though I had fired this very kiln with that very set-up of cones for almost 30 years.

Even odder? ....it continued to happen. Since last autumn, every firing has had the same thing occur. The cones go down in reverse order.

I got by. I know this kiln, and I figured out what to watch and I got by. But I remained curious.

As any potter knows though, problems never present on only one front. They always come in multiples just to keep life interesting. And this was no exception.

At the same time the 11 and 10 started acting up, my 010 started breaking off instead of bending.

The two things can't be related, right? I mean, they're in the same firing, so you have to suppose it has to do with where I've set them, right?
Except, as I said, I've fired this same set up for 30 years. Same cones.
Now my inner Sherlock starts wondering what, if anything, changed?
Though the two cones' situations don’t seem like they could be the same factor unless it WAS the kiln placement causing one to break and one to melt early, right? And, again, that could be it.

But here’s the strange thing. Against all reason, except the elimination of all other possibilities – or in the words of Sherlock Holmes himself, “When you have eliminated the impossible, whatever remains, however improbable, must be the truth.”

…the one thing that changed after 30 years of doing the same thing is this: I made my last set of cone plaques out of Miller 900. When I make cone plaques, I set up my extruder and then go about making an entire box (50) of all my cone plaques at one time. I line up my high fire, my reduction, and my bisque cones and make them all in one sitting. And I’ve always used whatever stoneware I had on hand.

Well, up until last year, the stoneware I had on hand was Standard 153 or Miller 850. Last year I had Miller 900. It was the ONE thing that had changed.
So, finally realizing this, I went about experimenting to prove this unlikely phenomenon to myself. Yesterday I put two 010 plaques made with Miller900 in my bisque kiln (something I’d never done) to see If, in a different kiln, the cone would melt or break off.

Further, I made new kiln plaques out of Miller 850 to put in my high fire kiln.
For the first firing since last Autumn, cone 10 and 11 went down in proper order.

When you have eliminated the impossible, whatever remains, however improbable, must be the truth.
Posted by John Bauman at 12:31 PM