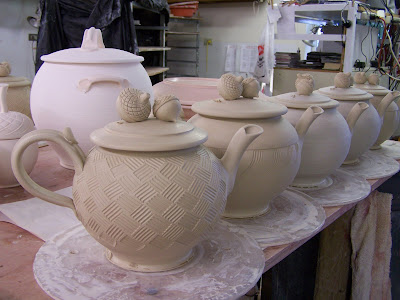 A photographer and I were discussing what I perceive to be the damage inflicted on the art fair market by the introduction of digital photography -- and its "camel's nose under the tent" effect on the other media at the art fairs.

Art fairs have reached the point of no return. They are perilously close to losing their very distinction as a market -- the very thing that made them a strong market in the first place.

The photographer disagreed with me, saying (among other things) that the end product was and is the only thing that matters in the art fair market. And (according to him) means of production should not matter.

Artists/Craftsmen can agree or disagree with that -- and what makes a good art fair. But then the photographer added this opinion as to why digital replication shouldn't matter:

"Reproductions in any form are an inherent part of our respective crafts, potters, jewelers, all artisans reproduce their successful and saleable work all the time. The only difference is the technology involved."

How do I disagree? Let me count the ways...

1. His comment, “Reproductions in any form are an inherent part of our respective crafts”

I don't know a single Painter or Potter John Henry who could ever hope to drive spikes at the rate of the photographer's steam drill. I mean, you gotta be kidding me if you think that I could ever, by the means referred to here as "reproducing" (with my wheel) make as much product as the average photographer teamed up with his lab.

2. His comment, “reproducing the same paintings over and over”.

When a craftsman does what you are claiming is the equivalent of mechanical reproduction he is not reproducing. Even if his intent is to market an already proven idea/product, his/her decision to remain in the realm of the hand-made – the craft – necessarily means that he/she has chosen a method that, by its very nature DEFIES reproduction

...And that choice (to remain a craftsman -- making, painting by hand) is a conscious one...

...just because a potter or painter wishes to further explore the same or similar ideas DOES NOT mean his intent - NOR THE OUTCOME - are reproductions. Even pots that I intend to be making with pretty much the same idea in mind evolve over time (a little with each piece, a lot over years)

3. So much of photography came shouldering a long 2X4 around in the china shop that was the art fair world. With the front length of board they swung around, they knocked over the painter’s capacity to make a living by cheapening 2-D work. With the length of board that they trailed behind them, they crashed the printmaker’s livelihood by clouding the long-held (in the art world) definition of “print”.

Then the photographers graciously (having so devastated the painter’s market) lobbied on behalf of painters so that painters could also sell “prints” at art fairs – further devastating those whose very craft WAS printing.

And, so, the art fairs slowly but surely became “commodity” markets. But if it doesn’t matter HOW a thing is made, then what EXACTLY is the draw of an art fair ANYWAY?

Heck, I’m too tired tonight to write well or express myself clearly. Having reproduced a BUNCH of pots today has left me exhausted. I’m sure that photographers will understand that.