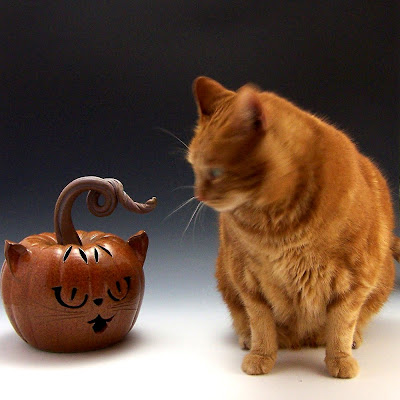 Carl Sandburg once wrote about fog that "crept in on little cat's feet".
Carl Sandburg never met MY cat "Crush". If he had, he would have modified the description to include the thunder that would no doubt accompany a 17 pound cat's footfall.
Crush doesn't "creep". When Crush enters a room the floorboards bend and anything on the floor that is loose and round rolls his direction. Crush has small cats orbiting him.
I was making Jack O'Lanterns on a day that I happened also to be thinking about my two cats, Crush and his brother, Moose. I decided I had to see what a Jack O'Lantern would look like as a Cat O'Lantern. After all, cats seem also to go hand in hand with the Halloween spirit.
This Cat O'Lantern lights from within with a candelabra bulb and socket that clip into a small hole in the base of the piece.
BOO! ....I mean, MEOW!
Posted by John Bauman at 9:27 AM