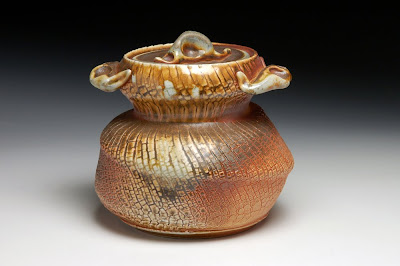 Dick and I started our potteries at just about the same time. And we met while doing art fairs back in the late 1970s.

Dick appears a very soft-spoken guy -- very philosophical. Yeah, he can project a mien that appears studious. And if he struck you as "thoughtful", you wouldn't be wrong. But when you get to know him, it’s the great sense of humor you remember. And some of the serious stuff.

He's a man as complex and interesting as the glazes he favors. 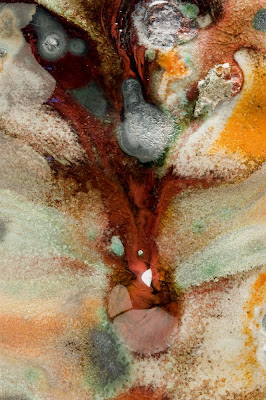 In the early eighties Dick and I were doing a local show together (we live about 25 - 30 miles apart). I had just paid good money to have a sign painter friend work up what I thought was a very cool new sign for my booth.

So, the morning of the show’s opening I walked over to Dick's booth and asked him if he wouldn’t maybe come over to my booth and tell me what he thought of the new sign. And he was his usual quiet, gracious self as he kindly complimented me on it.

The next morning as we were setting up, Dick pulled his old lemon-custard-yellow Ford van right in front of my booth. I barely looked up because our booths were fairly close to each other -- just across a wide, grassy aisle -- with his set-up only about forty feet beyond mine. I just figured maybe someone was parked directly in front of his booth and he was waiting for them to move.

Instead, Dick got out of his van and walked over to me. He appeared a bit sheepish as he asked, "I hope you don't think I'm copying you....I know this doesn't seem like a coincidence, but, really, it is."

I said, "Huh? What are you talking about?"

He continued, "...but I actually just had new signage done too."

Dick said, "Sure. In fact, one reason I parked where I did is that I could actually use a hand with it."

hmmm. Could use a hand with it? But I dutifully followed Dick to the back of his van.

First he pulled out a huge, full-sized street sign that read: NO STOPPING AT ANY TIME, and proceeded, with mini sledgehammer in hand, to pound it into the ground in front of MY booth.

Then he calmly and wordlessly walked back around the driver’s side of his van, hopped in and pulled forward just a bit, got back out and proceeded to pull out another huge street sign. This time it was an ATTRACTION AHEAD sign.

He continued this way, slowly and wordlessly pounding in signs, returning to the front of the van, pulling forward a few feet, and repeating. I don't remember all of the other three or four signs, but I do remember that by the time he pounded in the RIGHT TURN ONLY sign in front of his own booth, he had a crowd of uproariously laughing artists gathered and watching the spectacle.

But, of course, this is a series about potters I know and how they have influenced my pottery over the years...
Dick is as responsible as anyone for making me aware of the value of being connected to a broader world of clay – other potters, other methods, other approaches.

Up until I met Dick, my clay world was pretty small and I was mostly consumed with making a living. I remained fairly oblivious to just how, working in isolation as I was, I was making that pursuit much more difficult than it needed to be. I watched as Dick approached being a potter along a much different path than I had chosen. 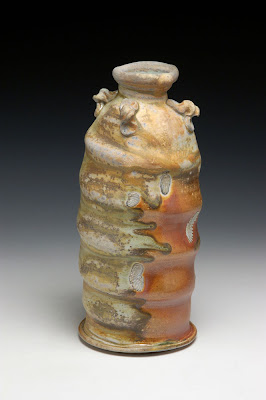 I noticed from my very first meetings with Dick that his education had already placed him within a circle of many potters -- potters who knew each other and shared ideas and information.

But with Dick it went beyond just that – beyond just where the fate of school choice had placed him. I sensed Dick’s voracious appetite for ceramic knowledge. It appeared his path to that discovery was in the acquisition -- first hand -- of whatever anyone was willing to share.
Dick exudes the joy of learning. 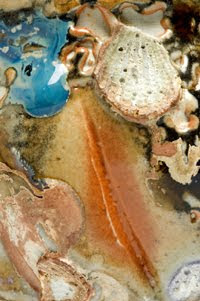 And within a very few years of our meeting, Dick was putting his wealth of acquired knowledge back into the ceramic world – submitting informative and inspirational writings in several clay publications. At the same time, Dick also opened my eyes to the world of workshops, the world of other potters who were sharing their ideas.

What a beautiful way to learn. Learn and share. Take and put back. 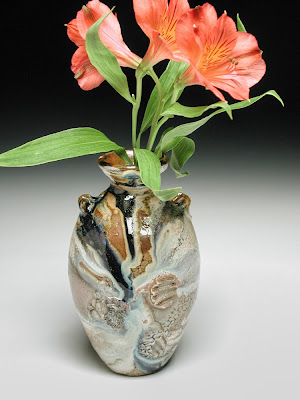 Additionally, Dick is a master of presentation. I can think of few other potters who show the same level of care in the packaging of the work they sell. Observing how Dick presents his work is a master's lesson to any potter. Dick’s attention to such detail adds even more to the sense of value in the already very fine pottery that he produces.

As a producing potter, there was always value in asking myself “How would Dick present this?” 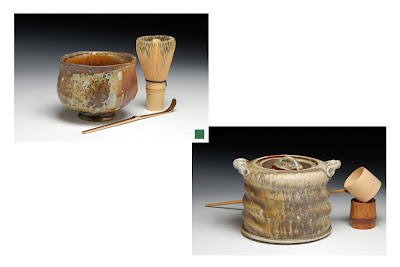 And that sense of conveying value is on display in everything Dick does. He has the finest short video I have ever seen on what it means to be a potter. You can watch it here, or in better resolution and fidelity on his website "my story" page.

...That’s how Dick Lehman has influenced my pottery.

You can read more about Dick here on his website where you can also order his pottery. 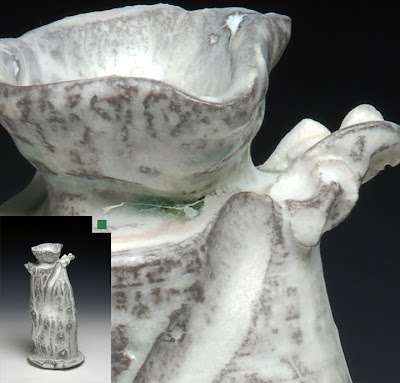