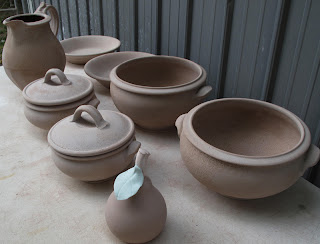 This is a table of glazed ware ready for tomorrow's firing.  If it comes out well, it could signal a new direction.  If it comes out poorly, it's back to the drawing board.  It's a glaze combination borne of frustration with one glaze that is SO beautiful, but SO equally untrustworthy.

When it is good, it is very very good
And when it is bad, it is horrid

...and it is being used in conjunction with a glaze so dependable and yet, in that steadfast dependability, is utterly dull.  Functional, but dull.  Perfect, even.  But dull.  It's neither matte nor glossy but rather, a perfect eggshell.  And it's a white that is neither cold nor hot.  Just true.  And opaque.


I guess it's one of those opposites attract things, isn't it?  One glaze that can deliver better results than one should dare ask for....but only if all the planets are aligned, and the wind comes from the right direction, and the proper incantations are uttered...


...hopefully made dependable by marriage to another glaze, milquetoast, but oh so dependable that I could be breaking mirrors, walking under ladders, and drawing aces and eights while firing it, and the thing would look the same every time. 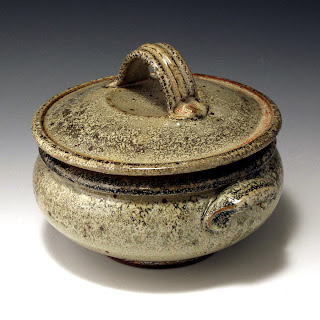 
I'm going to be doing my local art fair for the first time.  Why haven't I done it before?


1.  It's always held the same weekend as at least three other art fairs that are some of the best in the midwest -- Cincinnati Summerfair, Columbus Street Fair, and Kalamazoo's Bronson Park.  And I've always been lucky enough to get juried into one of those great shows.


2.  I've never wanted to face the possibility of doing poorly in front of my home town.  Sounds silly, perhaps, but there it is.  Through an odd set of circumstances in the history of my pottery  -- mostly that, until Etsy came along I sold 99% of my work at art fairs -- I've never sold very much pottery locally.


In fact, though 20 years ago I had a "local"  (in quotes because it included South Bend and Fort Wayne, both of which are not local) mailing list of 900+ names, since I closed my gallery 20 years ago, I've been a business entity almost entirely disconnected from my community.  Most Warsonians aren't even aware that I have this pottery on the edge of town.


I have a sneaking suspicion that Warsaw is not my market.  Oh, the stories I could tell of when I DID have a gallery.  And so I've always been a bit reluctant to find out whether or not I could sell locally.


But last year I was set up in the near-100 degree heat in Kalamazoo watching a heat-beaten crowd shuffle by my booth.  I spent the better part of the weekend concluding to myself that I could be doing that bad at my home town show.


But I have another reason for doing the local show.  I'm going to put out a poster to see if there's any interest in pottery classes or workshops in Warsaw.  This has been an ongoing thought I've had for some time now.  Maybe I'll discuss that in future posts.  But, in short, I've been thinking about passing along some of the stuff I do.


Additionally, I had the pleasure of visiting Seagrove, NC a couple of weeks ago on my way to a show in Greenville, SC.  Yes, I know that Seagrove is not on my way to Greenville.  But it was as close as I'm likely to come in the near future.  So I took the opportunity.  I'm glad I did.


I had the pleasure of spending several hours picking the very experienced brains of Meredith and Mark at the Whynot Pottery .  They patiently let me ramble out my jumble of thoughts on the topic, and then gave me some really wise advice and direction.  It was just helpful to talk to some other potters about the idea.  Just saying it out loud to such a sounding board was an opportunity to see if it even sounded plausible to MY ear in the telling.


Anyway, I'm rambling again.  I haven't blogged much and it appears my tires need a retread.


So, here's the poster.  I'll be set up in Winona Lake this Saturday and Sunday.  I say that to nobody in particular.....Google Analytics assures me that I do not, nor have I ever had any readers from the Warsaw/Winona Lake area.  Maybe that will change after the weekend, eh?  (I threw in the "eh".  I DO have Canadian readers) 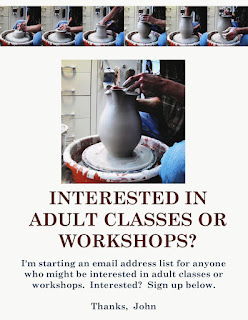