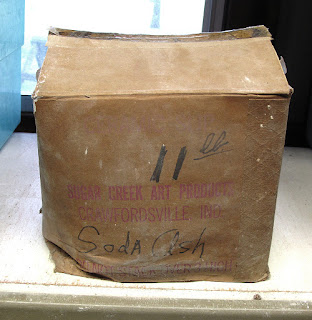 I inherited this box of soda ash from my friend, Dave, when he made his final move to FL. It's marked: "Sugar Creek Art Products" -- a company that hasn't been around in more than 30 years (maybe 40).

I finally broke into the box yesterday to mix up a shino glaze. Some of the soda ash has petrified into stones that would have required mechanical breakdown (they'd need to be re-crushed) in order to be incorporated into a glaze.


As I screened and re-screened the glaze, I ended up with rocks I had to throw out. I then re-introduced more soda ash by guessing how much I had thrown out in the rocks.
I'll probably end up with a mutt glaze.

That's not a bad thing. I've noticed that some of the most remarkable dogs I've known in my life -- both by their beauty and their behavior -- have been mutts. And each time I noticed such mutts -- whether the "Tippy" I grew up with, or the "Bear" I met recently on the trails -- I couldn't help but sense the bittersweet nature of such a dog. That is: there's no duplicating it.

The mutt is a treasure....but once gone, you can never again have it.

Oh, I get it. No dog is duplicate-able. But at least a breed will put us in the ballpark of looks and behavior.

But a mutt is its own unique being, so often for the better.

I hope this mutt glaze I created yesterday is more than I hoped for. If it is, I'll name it "Tippy" and enjoy every pot I make with it.
Posted by John Bauman at 4:35 AM