From yesterday's firing (unloaded this morning) 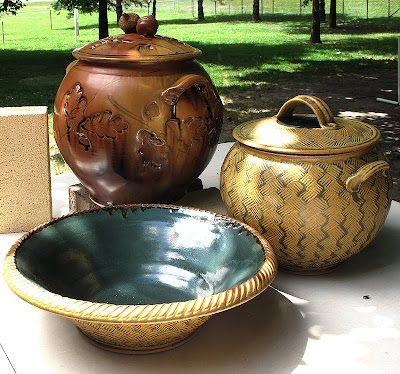 Some snapshots from last weekend (In Madison, WI at the On The Square Art Festival) 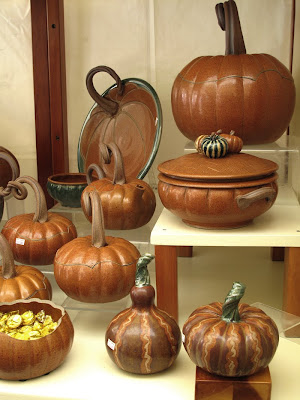 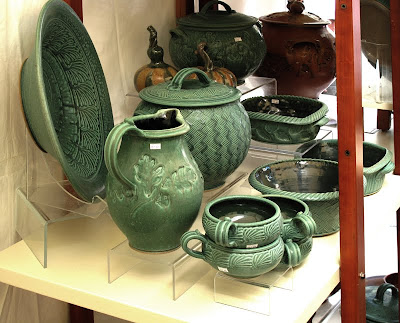 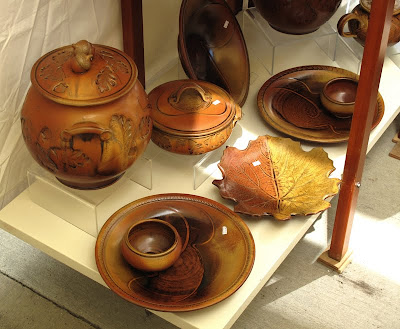 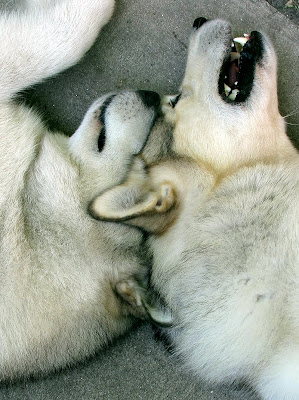 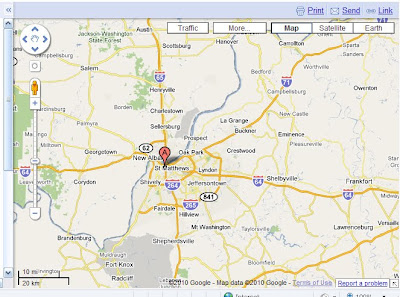 Take a look at the map (above) that I screen-captured from Google maps. Notice anything funny about it? See anything missing? Think about it for a minute. I'll wait.

Yeah, I know. What in the heck did Louisville ever do to the Google people to warrant being made anonymous on their map?

Every other major city comes up with its name squarely and prominently on the google map.

So, what's with Google and Louisville? There must be some HUGE and scandalous story with National implications behind this slight. There must be.

Or else it's a simple oversight.

One or the other.

I'm hoping that it's a huge scandal, and my observation just made me the reporter who scooped THE ENTIRE WORLD OF MASS MEDIA.

In My Van I'm Going To Carolina 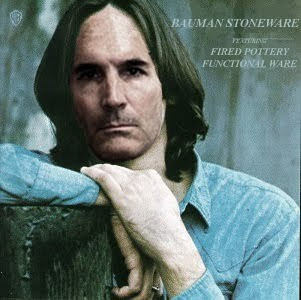 It all started early last summer when I was at Cincinnati Summerfair. Karen Baum (of Baum Pottery ) said, "John, you would LOVE the WNCPF!", and then proceeded to tell me about this wonderful two-day celebration of pottery.

Karen related that it's a very small show, but that it's a real EVENT. They have a "Pottery Olympics" with events such as tallest-thrown-pot, longest-pulled-handle, widest-thrown-bowl, etc. "Everyone has SO much fun", she continued.

But when I got home from Cincinnati last year, the event was already closed to new exhibitors. I thought about the show from time to time, but in the busy-ness of the year that followed, I finally forgot about it. I hadn't written a note to remind myself, and the show doesn't send out reminders.

But early this year -- while at the Lafayette, IN "Round the Fountain Art Fair" -- Larry Spears and I got to talking. Larry said, "have you ever heard of the Dillsboro, NC show?" I immediately answered that I hadn't....but the next day I googled up "Dillsboro" and found ...
....oh....
...the "Dillsboro" that Larry was talking about was the very "Western North Carolina Pottery Festival" that Karen had told me about the year before.

This time, when I got home from Lafayette and googled up the show's information site, I was able to get my application and jury images in just under the wire.

I've always been fascinated and a little obsessed with North Carolina. Some reasons are obvious -- the music and the pottery. Other reasons, I can't even begin to describe -- just that I feel a sort of connection with the State.

I haven't done a show in North Carolina since the days -- more than fifteen years ago -- when they used to close down Tryon St in downtown Charlotte and hold "Springfest". It was always a great show. I still happily remember not just the good show, but the camping out at the nearby KOA and listening to Beach Music on a portable radio in the tent.

I've also had a number of friends and acquaintances (Tom Turner, Jim & Shirl Parmentier, to name a few) move to North Carolina in recent years. Each time another friend does so, I get just a tiny bit greener with envy.

Well, I can't wait for November. I'm planning on packing up the pots, the guitar and mando, the dogs, and heading south!

As beautiful as the weather was for the mowing, it was all that brutally hot and humid for the raking and mowing...

Kim's (my neighbor) tractor might be a good rhythm track-tor for an upbeat bluegrass breakdown. I should have picked up my mandolin and played along instead of shooting video. It's all the rage on youtube...


As is often the case when a Hoosier summer day reaches such a fever of heat and humidity, pop-up thunderstorms were happening all over the northern part of the State. For about a half-hour, with dark clouds rolling in along the northern horizon, it looked as though my neighbor might not get the raked hay put up after all.

Thankfully, the storms stayed to the north. By 9 PM, the last bale was hoisted onto the stack and the wagon was pulled away...

Posted by John Bauman at 6:27 AM No comments: 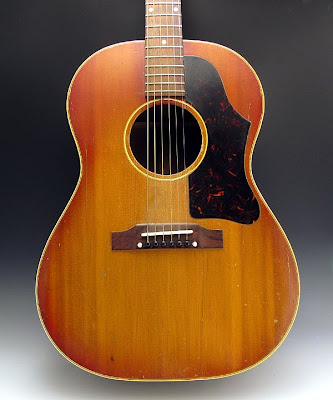 This old guitar has been in my family since the mid-sixties. My brother owned it, and when he went off to Italy (Air Force) back in the very early 70s, I had the pleasure of keeping it and playing it daily for more than two years. I hated to give it back.

I love the looks of a well-worn, well-played guitar, and this one has definitely had any and all the polish loved off of it. The bridge is the work of 3 luthier/repair guys -- Mark Dillon, Greg Kent (both graduates of the Roberto-Venn School of Luthiery), and finally, Jim Shenk -- who have kept it playable over the years. 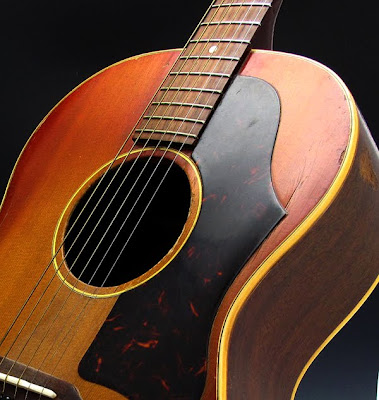 I'd lost touch with that guitar for over a decade -- since it was my brother's, I just assumed he had it. But after my mom died I was surprised to have found it in her closet as I was going through the last of her things. When I opened the case and looked inside, it was like seeing a long lost friend. But it was a very battered long lost friend.

The top was cracked from the soundhole to the butt, and it was sunken in -- curling downward nearly an inch in the center.

The crazy thing is, it was still playable. All that hardware that makes that abominable Gibson adjustable bridge such a tone and volume thief, was the very thing that held the two sides together and actually spanned the crack in such a manner that the strings barely even buzzed when played. 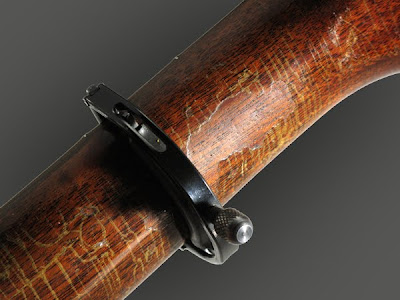 Within a day I was on the phone talking my brother into selling the guitar to me.

Mark Dillon had the thing for about 9 months -- slowly humidifying the top so that he could gently bend the top back to close-to-flat (It probably never was arched anyway). He was able to do that without creating new cracks as he raised it. He made a new bridge plate, but salvaged the braces (that had simply broken free of their glue bonds instead of breaking). Finally, he added a very ugly, very visible external cleat to the bottom of the soundhole (spanning the genesis of the crack). I never asked him to convert the bridge, so when I got it back from him a year from his having started work on it, it still had the adjustable bridge. I played it that way for about a year.

Then I handed it off to Greg Kent for the bridge conversion. I'm glad I did. Greg was not only a better craftsman than Mark, he was as good a craftsman as I've ever run into in repair (his background was in machine shop work). He dissassembled the bridge and routed out a channel for a rosewood plug (that you need a microscope to detect) in which he routed the channel for a new bridge. He makes the most interesting compensated saddles I've ever seen, He makes them with an C-curve -- rounding its way to the B string compensation and then back again. He chose unbleached bone to make the saddle.

The guitar became a sound monster. Definitely not loud, but one of the best sounding guitars I've ever played. I am a lucky guy. 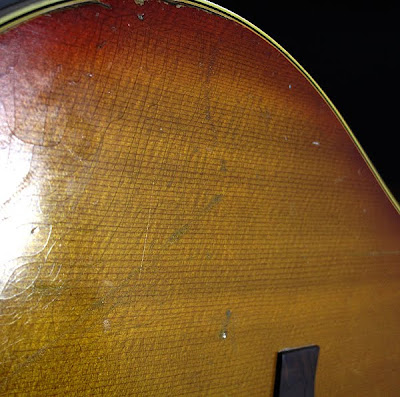 Of course, with a crack so profound as Mark started with, I was bound to have subsequent problems. In more recent years, Jim Shenk has reglued and otherwise redone the braces twice from their simply breaking free, and once from....

One day I was at my wheel throwing when Dar came out to the shop in tears. She was carrying the Gibson -- its back facing me -- and apologizing through those tears...and crying hard enough that I thought something was really wrong (and not just that she'd possibly damaged my guitar). Well, she knows I treasure the guitar -- not just for its tone, but for the family history that goes with it (a tale for another windy post).

Anyway, she finally turned the guitar around to reveal a broken string, a piece of the top broken completely out and missing between the white soundhole ring and the soundhole (giving the guitar a sort of Leon Spinks appearance), and (upon further inspection) a brace broken free.

My first thought was, "I don't think even I would have cried over that", but that's probably because I knew it could be fixed and she didn't. And she cared that much -- knowing that it is a guitar that I love. Anyway...

After reasuring her that it really was no big deal, she was finally able to tell me what had happened: She was using the upright sweeper in the bedroom. The guitar was standing alongside a wall. She stood the sweeper arm up and walked away, only to find that the sweeper arm hadn't clicked into the "locked upright" position. As soon as she walked away from it, the arm came crashing down right into the guitar.

I've gone through writing of the whole story because it paid off in one of the best guitar-related one liners I've ever heard:

When I told the story to my friend LJ, he said, "Wow. That guitar must be really quiet now"

I thought to myself, "Well, yeah, it's never been a very loud guitar anyway" and I said as much to LJ.

To which LJ continued, "...because everyone knows that sound cannot escape a vacuum."

Anyway, after the falling vacuum incident, I took it up to Jim Shenk for repairs. He made a silk purse out of that sow's ear of an accident. He invisibly reglued the broken out piece, repaired the brace, and while he was at it, he took out Mark Dillon's ugly cleat and replaced it with a totally invisible laminate. He made it stronger that way too. 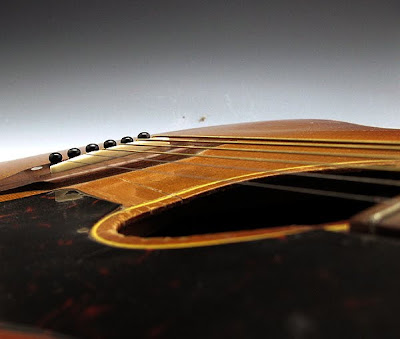 I play this guitar nearly every day -- it's usually the last thing I do every evening.

I've been waiting anxiously for this day. Kim (my neighbor) couldn't have had a more beautiful day for it... 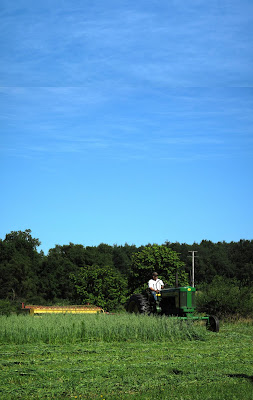 I've been watching the field across the street with interest. After twenty years (the time I've lived here) of this field being planted alternately in beans or corn, this Spring, Kim decided not to lease the land but instead put in something he can use for his 12+ horses.

My friend, Jim, asked me, "So, isn't he essentially just mowing his lawn?

Then, sure, he's just mowing his lawn. 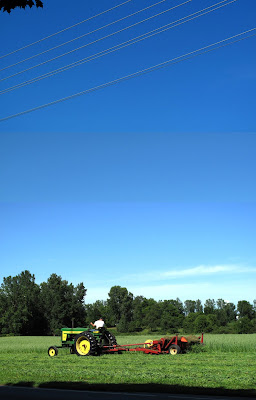 Posted by John Bauman at 3:41 AM No comments: 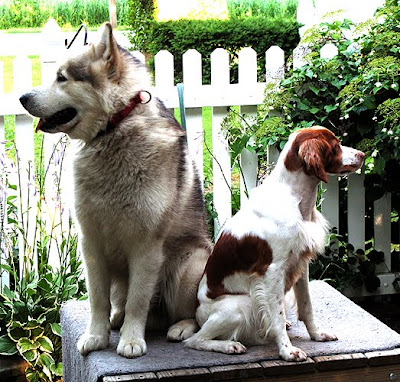 Dar's off to agility training with our dogs, so I just got done running Rawley alone. I did four miles. Rawley did at least five.

When I run with Breeze, Breeze is all business. He cuts the corner out of every angle. You could lay a straight edge on his tracks on the straights and find that his footing doesn't veer an inch to the right or left. On a city street Breeze will often track ON the white side line.

We just ran the greenway -- a two mile long strip of 8'-10' wide pavement that snakes through the nearby parks. The entire four miles (out and back) Rawley ran an "S" path from one side to the other and back again.
Posted by John Bauman at 5:58 AM 3 comments: