I don't much care for turning my blog into a simple photo share, but I've been having really good firings getting ready for my show in Minnesota next weekend.  Here's the kiln load I opened last night.

July 16 opening. This is the first of seven firings of pots I'll be taking with me to the Minnesota Pottery Festival.

Encouraging: It's the best cone 10 firing I've had all year.

The Standard 182G I got in a few weeks ago is not only bubble-free, the Millring Red glows on it.

The Albany glaze it a pleasing gold with orange undertones and black rivulets. Nothing cloudy at all.

The new carving tool makes the imagery pop 3D even more than it used to. 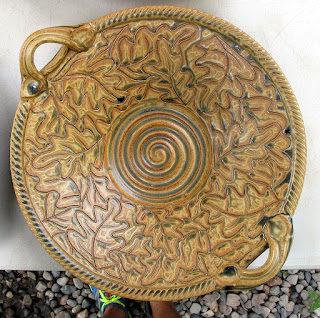 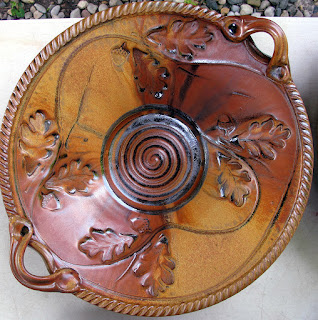 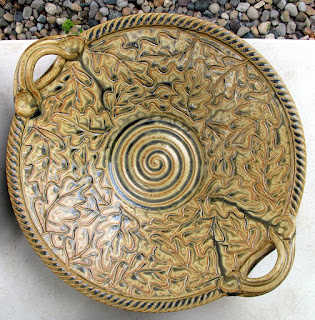 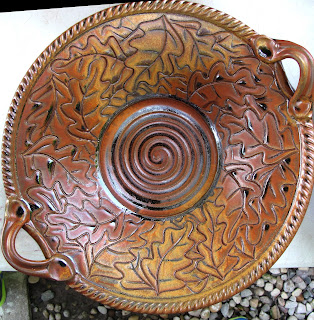 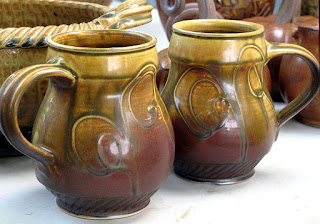 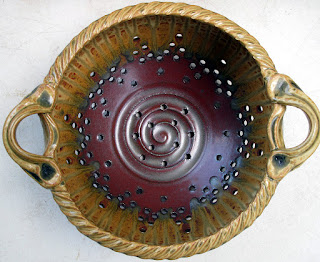 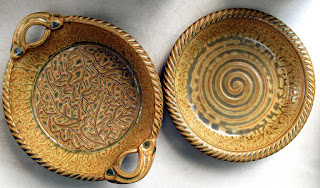 Posted by John Bauman at 1:44 PM No comments: 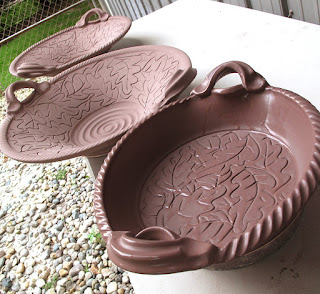 Taking advantage of the weather to glaze in and outdoors today. It triples my table space, gives me lots more shop room, the wind dries the glaze on the pots, and the wide open door allows flies free entry to my shop. 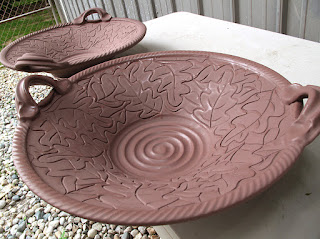 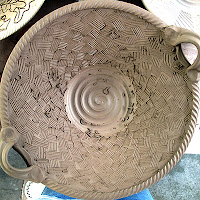 I asked her, “Do you listen to your daughter’s music? …or she, yours?”

Suddenly she got a very knowing look on her face.

It’s a discussion that, as someone interested in human behavior, fascinates me. And as someone trying to make a living doing something creative, it interests AND confounds me.
One might be able to find exceptions, but as a rule it's improbable as an artist to appeal to a generation other than one's own. 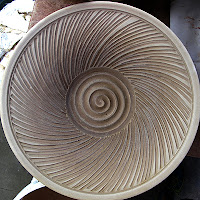 I don't know if it's hormonal or experiential. But it's true.

And since the market is the demographic most likely to spend money on the creative efforts, it becomes an almost impossible task to find enough market in a demographic that has moved on. The low hanging fruit is only available to the young.

There was a band or a songwriter (I don't remember the details as well as I remember the story) in Europe that, realizing this reality, hired a front band so they could continue to sell their music. If that effort was successful, at least it would indicate a hope for a possibility that the artistic product CAN, in fact, be successfully divorced from the producer for the purposes of marketing. 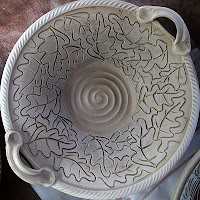 I once presented a thought experiment to a group of fellow art fair craftsmen: “What do you think would happen to art fairs – within, say, 5 years – if all older craftsmen were fronted by younger representatives successfully and completely ACTING AS US?

Would art fairs be meaningfully reinvigorated, or is it also inherent to that generation that they have no interest in that kind of market (where they have to walk around outdoors and actually meet artist/craftsmen face to face.)?

You may point out that there are, indeed, artists and craftsmen that DO appeal across generation. You might even list some such artist/craftsmen.

Well, I could opine that the reason you can create such a list is because they stand out for their rarity. 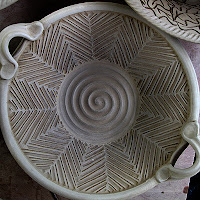 But the reality is more perverse than that. I'm not saying there's NO cross-generational market. I'm saying that when you're cross generational, the market diminishes. That's a completely different, far more dangerous situation (dangerous from the standpoint of sustaining a business or life-sustaining income from it).

The perversity is that when the low-hanging fruit is gone, and you're stuck with either going back to the barn to get a ladder or climbing out on a thin limb to continue harvesting....that's when you're forced into making the most precarious, often stupid and/or desperate economic choices.

Add to that the vagaries of taste and fashion and you're getting a better picture of the orchard. 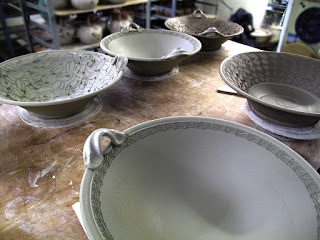 But another way of looking at the whole thing: 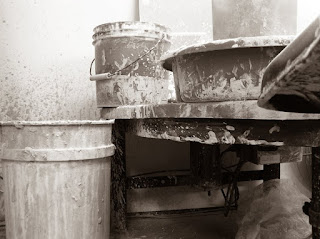 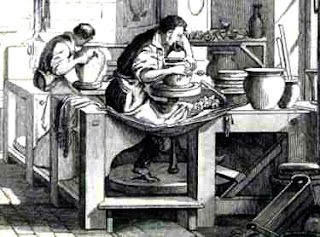 When John Millring was a little baby
Sittin’ on his mammy’s knee
He picked up some stoneware and
He slammed it on the wheel and cried,
“Clay is gonna be the death of me, Lord, Lord
Yeah, pottery’ll be the death of me”

John Millring said to the captain
“Lord, a man ain’t nothin’ but a man
But before I let that
Ram press beat me down
I’m gonna die, a spinnin’ wheel beneath my hands, Lord, Lord
I’ll die with wet clay slippin’ through my hands”

John Millring was a-turning on the right side
That ram press was pounding on the left
“Before I let your press
Fill this world with stodgy pots
I’ll center and pull myself to death, Lord, Lord
I’ll turn’n’burn my pottin’ self to death”

Well the captain said to John Millring
“What? ..is that a storm I hear?”
John Millring said, “Nope,
That ain’t no storm out there
That’s just my spinning wheel turnin’ ware, Lord, Lord
That’s my mighty kick wheel a-suckin’ air.

Now the captain demanded that they measure
Just to see who might be behind
John Millring done already
Throwed twenty-seven pots
The ram press was only up to number nine, Lord, Lord
The ram press had jus’ barely finished nine

Mid the heat of the contest, John heard music
With the volume knob dialed up real good
Then he grabbed a hundred pounds
That he centered good’n’sound
And threw a crock to hold a cord of wood, Lord, Lord
He winked and said “I did that just because I could.”

John Millring, he kept a-makin’ thrown ware
But, y’know, the press, it kept a-makin’ too
Maybe you can’t tell the difference?
Well, some folks know what’s good
There’ll be pottery a-plenty for you too, Lord, Lord
Yeah, mass-produced or hand-turned’s up to you
Posted by John Bauman at 3:05 PM 1 comment: 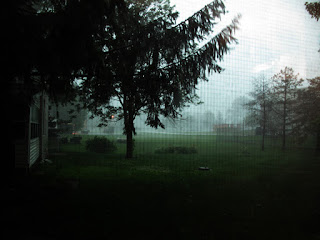 A beautiful, big, black storm has just rolled into town. At first I watched in awe and fascination out the back door of my shop as the darkness coming from the west completely overtook the light of morning. It's now an anachronistic midnight outside.

I can't concentrate on work with all that wonderful drama going on outside so I walked back over to the front door -- away from the windward side that would blow the now considerable rain into the shop -- and stuck my head out the door and watched.

But as I opened the door to watch....incredible. A redbird is out there in the midst of the bluster, and he's singing. He's singing his heart out. Beautiful.

So now here I sit at my desk with the window beside me thrown wide open. I'm listening to a most unique storm suite -- a natural symphony -- the sound of rain ripping through leaves, thunder rolling a bass line and irregular rhythm section, and a redbird carrying the incongruously cheerful melody line throughout.

And now it's tapering as the thunder rolls into the distance. The rain has dropped from its crashing crescendo to a quiet, steady waterfall....but on and on the redbird sings.

It's better than television.
Posted by John Bauman at 7:06 AM 1 comment:

I've always enjoyed the monochromatic world of a shop filled with leather hard pottery. But land a few things of color and the stark contrast is eye-popping. Last year I did a series with Koolaid glasses and pots. This summer the fruit is in season and color. 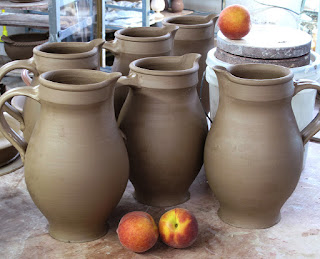 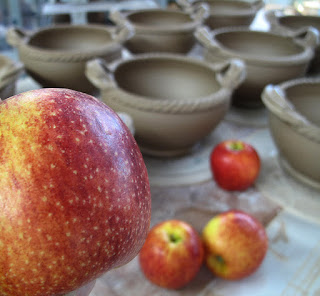 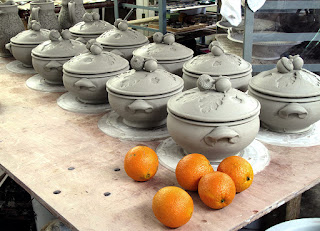 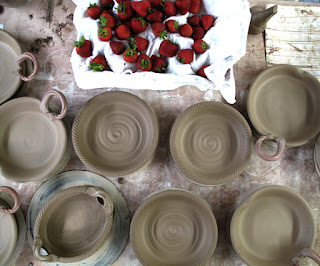 Posted by John Bauman at 2:03 PM No comments: