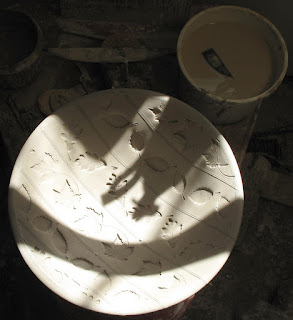 He never prayed for cats. He couldn’t handle the disappointment.
Posted by John Bauman at 7:26 AM 2 comments:

A Time Beyond Today 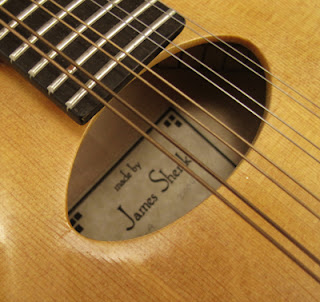 ...became a dream within a dream. I dreamt that I was playing at the Goshen Old-Timey Music Jam. I couldn't get my guitar re-strung in time so I started "da-da-da-da-da-da-daaaa-ing" through the first fiddle tune.

Soon the entire farmer's market joined in as well.

So there I sat in my dream, surrounded by an otherworldly chorus of da-da-da-ing in full-throated harmony. It gave me chills.

Then I woke from the dream and started telling the woman I was standing next to about the whole dream. Except I was still dreaming. 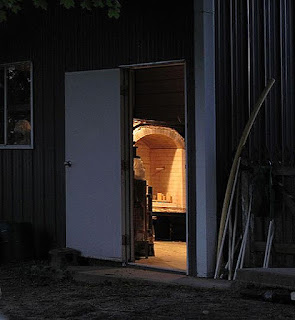 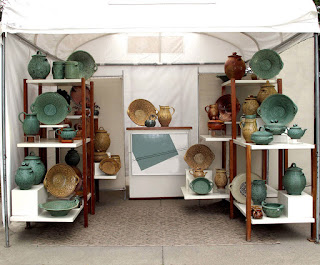 This is what I ultimately came up with.

It's hard to convince yourself to leave well enough alone with only a few pots because part of you keeps niggling at you telling you that some juror is going to see pots on the display that sway him/her in a way that the individual images did not.

That makes SO little sense that it's hard to believe it holds any sway when composing a booth slide, but it does. I think it might do so because most shows ask for SO few individual images. I wish all shows would ask for 7-10 images of individual work.

I do believe there is a HUGE range of options for presenting images that are still honest while not strictly journalistic. That is, we all know that the images we present need to be visually interesting in and of themselves.

Sure, many of us still try to make the images visually interesting and still honest, but the reality is that most images that get potters into the A shows don't really represent the pot as seen in a real-life 3D situation.

Part of the reason for those dolled-up, super-dramatically lit, high-contrast, overly-saturated images is an attempt at compensation. That is, we are only TOO aware of the disadvantage with which we are saddled when presenting 3D work in a 2D format. So we understandably compensate.

I know potters whose work I don't recognize when I peruse the online images of Cherry Creek, Des Moines, St Louis, Fort Worth, etc. But I understand why they present the images they do. Quite often, as good as their work might be, it's simply too subtle to present journalistically.

Someone suggested the idea of shooting one side only as if in the booth. I've often thought of that. I've come to believe that there are two basic reasons a booth image is required: 1. To see if the individual images are really representative of the body of work, and 2. To envision what the booth might look like as viewed at a show (will it fit in with the rest of the exhibitors?)

If the only question being asked by the jury, relative to the booth image was #1, then a partial booth would not only serve the purpose, it would arguable do so even better than a full booth.

But if #2 is the primary reason for the booth image, then the partial booth won't work.

I wish a show would state their purpose for a booth image. If they did then a potter could equip himself with either/or booth images, depending on the show.
I do kinda wish  (I say with great regret. Yesterday's attempt took all day) that I had taken a few shots with only a few pieces on the shelves.

Maybe I ought to pay a photoshop master to take the pots off the shelves via digital magic.

When I've sat on juries I've noticed how much I depend on the booth shot to tell me the real story. I'm not nearly so seduced by hot single image shots as I am turned off by horrid booth shots.

Pottery booth shots taken at shows are quite often terrible. Even if the potter has taken the time to "neaten things up a bit". The lines are crooked, the wrong things show, and the lighting is usually bad.

I know I should score them high points for integrity, but I admit that I don't.

And I was just getting ready to get on a soap box about how we artists owe it to each other to show up at art fairs with the best looking booths we can manage. When we let our booths lapse -- need to be repainted, Pro-Panels frayed and shabby, canopy no longer even close to white, assembly wobbly and off plumb... we aren't just hurting our own chances at that art fair -- we're hurting every other artist at that show.

That's how art fairs work at their best. We artists trade on the work, weight, and reputation of all the other artists in that show. We owe it to each other to clean up our acts.
Posted by John Bauman at 1:07 PM 4 comments: 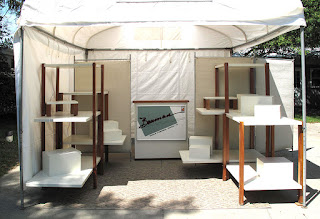 I had a beautiful day to work outdoors. A project that has been on my mind now for a few years, I finally have the perfect day to accomplish.

The sun is making too much contrast. I can't get the lighting right -- even with my studio lights in front filling in.

I don't like this task anyway. I'm relatively comfortable with the rest of my jury images. The booth shot has always made me edgy.

Art fairs don't really want potters. Art fairs want artists. That makes sense. But I'm a potter and I know it and I don't intend not to show it.

But the only way I'm going to get a booth shot that won't keep me out of the A shows (rather than scoring them every once in a while) is to start taking stuff off the booth and re-shooting.

Making a booth shot I should be saying, "That might be one of the twelve pieces I put out to make the display look as gallery-like as possible." Any more than that and I start to look like a potter. 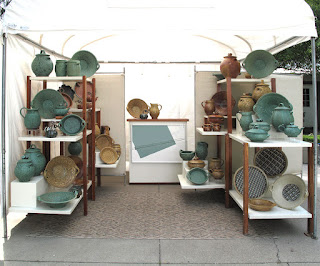 It's editing. Everyone could use an editor. 'Specially me. 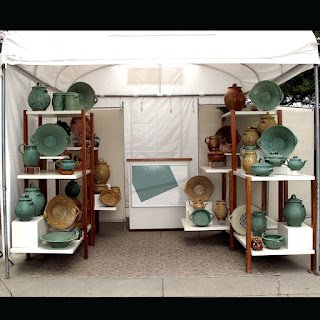 Here the clouds rolled in and allowed for a little better lighting.  I removed about a dozen pieces but it still looks like a pottery.
Posted by John Bauman at 2:40 PM 1 comment: 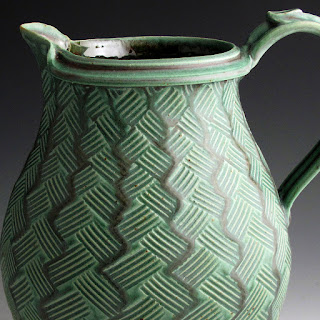 I work almost daily with a very talented young sculptor from the Czech Republic.
His English is better than my Czech like, say, a bird is a better flier than a pig. But by the end of the day I end up speaking and thinking -- not Czech, but Czech-like.
Some of the quirky linguistic adaptations he makes as he translates his thoughts into my language roll 'round and 'round in my mind -- both the way they sound and often the significance of meaning intended and unintended.
For instance (and my favorite): "Dis moment" 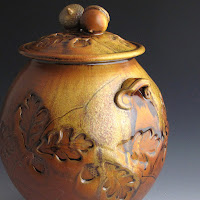 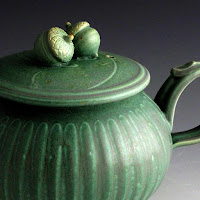 I like it. My mind expands on it. I imagine the lovely thought that the moment in time that I conceived and made permanent the curve of a shoulder or the arc of a handle or the geometry of a trimmed foot...
...some future user of that pot will relive that moment in dawning realization. They'll "get" the inspiration I had for that shoulder. They'll understand the reasoning behind the foot. They'll feel the intent in the arc of that handle -- each of those moments relived and translated....
....from the intention of my mind, to the work of my hand, to the perception of the end user -- all in a shared moment.
A shared moment. Time and time and time again. For the life of the pot, from the life of the potter, to the life of the user.
Dis moment.
Posted by John Bauman at 5:00 AM No comments: