The Effortless Custody of Automatism 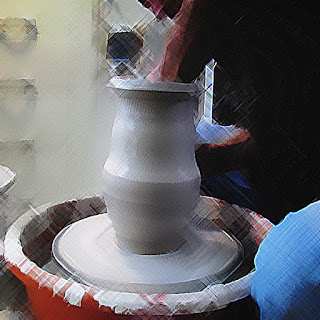 “….it missed by this much”, he said.  And to emphasize just how tiny and insignificant “this much” was, he thrust out his hand, holding his finger and thumb a scant quarter-inch apart.

Knowing the distance between two fingers – and how to set and hold them there –is perhaps the central skill to being a potter.  It’s not a “squeeze”.   It’s a set-and-hold.  And learning the feel of that distance and being capable of holding it -- whether thumbs may touch over a short wall for reference….or the fingers are completely separated and working on either side of a very tall wall that reaches to the elbow and beyond – that’s what a potter needs to learn to make a good, even-walled pot.  It’s what a potter needs to know to make a pot light enough for function, but heavy enough for a lifetime of use and abuse.

When that skill became second nature to me, I found that my mind would venture off from that starting point – that focus on two fingers – to beyond.  What starts with a slam of clay on wheelhead and a whirring motor, a few seconds worth of slip-slap-center ….  fingers assuming their positions in that set-and-hold, soon (and inevitably) leads to my focus slipping right between those fingers along  with the clay…and wandering off.

Some of my most creative moments happen while I’m at my wheel, my fingers set on spinning clay.  With what has become an automatic focus on my fingers, my imagination is freed.  Now not only do I create the pot presently on the wheel….I contemplate the next, and the next.  I imagine new ideas, new pots.  My imagination becomes as malleable as the clay I’m forming.  I write essays and poetry (yes, at some point I have to wipe slip from my hands and type those thoughts out).  I dream my best, most fruitful dreams with my fingers set “this much” apart.

I'm given to believe that writing lyrics is as much knowing what to leave out as it is what to include. A good song is a well edited song. And I can only imagine the first drafts that we never got to hear... 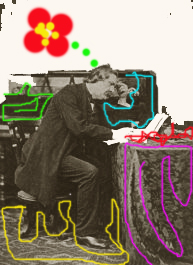 In the clearing stands a boxer
And a schnauzer and a pug.... 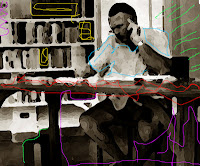 Riding on the City Of New OrleansIllinois Central, Monday morning rail15 cars and 15 restless riders3 conductors and a partridge in a pear tree

My mother was a tailor
She sewed my new blue jeans
My father was a rumblin' man
God, how he loved his beans

Amazing grace, how sweet the sound
Like sugar in my ear
I once was lost. That's now compound
'Cause now I cannot hear

...and she rushed out to brush the snow away so it wouldn't die
And I chided her basic misunderstanding of botany
First, the tree, at this point, is dormant and cold won't matter
Second, snow has an insulating effect making the ground....

hmmmm. is "hottany" a word? this isn't working

If a picture paints a thousand words
Then why can't I paint you?
If I promise not get paint in your eyes and mouth?
Tell me, would that do?
Posted by John Bauman at 3:27 PM 3 comments:

My friends, Tim and Pam Frye, make wonderful whimsical and functional pottery that walks a timely tightrope between retro and contemporary.  A good half of their “line” is as much sculpture as pottery.
But beyond the wonderful pottery they make, for the past 3 years they’ve also committed themselves to educating the population around rural Effingham, IL in the craft and art of making pottery.

Three years ago they scoured the countryside for pottery equipment (wheels), put out what advertising was necessary (as it turned out – not much. The demand was already high), and opened their shop to teaching weekly classes.  They now have as many students as the two of them can handle year-‘round.

It was for that reason I spent much of my weekend bending Tim’s and Pam’s ears to the details of teaching in one’s studio.  They generously answered every question, and even answered many questions that I didn’t know enough about teaching to ask.

At one point, Tim and I were talking about the difficulty of teaching something that we’ve done for so long that what we’re doing has long since become a part of our autonomic potter system (Tim and Pam are also 30+-years into this pottery life).

Tim related that the gap between his nearly unconscious skill level – what he does effortlessly and without thought – and the student's complete unfamiliarity with clay, makes Tim appear to them as though he is doing something nearly akin to supernatural.

This gap and perception was highlighted one evening as Tim was demonstrating how to throw a bottle on the wheel.  And (wouldn’t you know it), as sometimes happens, the bottle got away from him.  Perhaps just a thin area in the wall.  Maybe a harder lump amid the soft clay. It happens.  Whatever the reason, the bottle flopped.

“He’s HUMAN!” exclaimed one of his students.

….and that’s when Tim zapped ‘er dead with his laser vision.
Posted by John Bauman at 5:34 AM 7 comments: 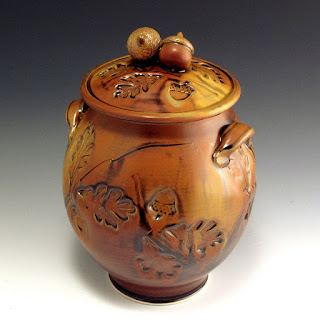 I don't know why, exactly. Yes, I sorta do. Metaphorically speaking, "Casting bread on the water" is what I think it's referred to. Maybe a little bit of reaching out to the broader pottery world as well -- something that's been on my mind lately. Anyway, I've decided to enter the Strictly Functional Pottery National. The jar is a piece I fired in March. The pitcher is still hot. 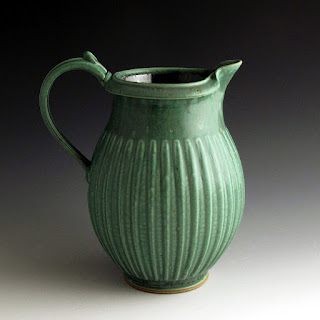 Come by and visit me at the Winona Lake Art Fair this weekend! I'll be right on Park Ave in front of the Barber shop.
Posted by John Bauman at 9:46 AM 3 comments: