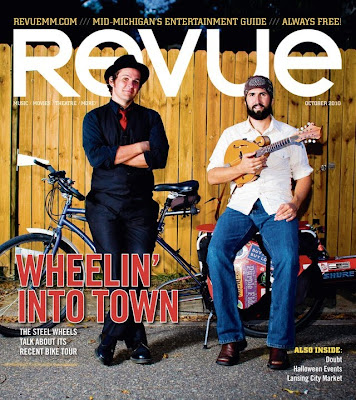 It was a typical hot July evening as I made my way up to Goshen to see Steel Wheels in concert. For several weeks I'd been pushing HARD to get ready for the big Ann Arbor Art Festival. That finally over, I needed a night to push back. There are few places on this Earth where one can relax so completely as in Goshen, Indiana.

I'd noticed (via facebook) that Steel Wheels was going to be doing a house concert and (for once) I was free enough that evening to make the 20 mile trip north to take it in.

Steel Wheels is (mostly) Jay Lapp and Trent Wagler, but the group on that July night included Brian Dickel on bass and vocals. Additionally, it quite often includes fiddler Eric Brubaker as well.

Jay's dad, Jerry, has a B&B called the "Red Bridge Retreat" in Goshen and the outdoor concert was held on Jerry's lawn right alongside the mill race. I parked and walked across a small park, along the mill race bike path, and finally over an old steel bridge that leads right to Jerry's B&B. 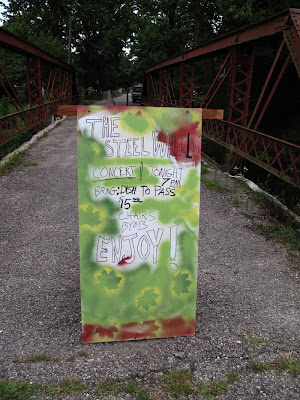 Goshen concerts are a world unto themselves. Whether at the Red Bridge, or at LVD's in the Old Bag Factory, there's a sense of community, commitment, and participation. It's evident in the warm, friendly atmosphere, but also in the fact that there's almost always a carry-in dinner involved with Goshen concerts.

As I made my way over the steel bridge, I could already smell the grills cooking the tons of food people had brought to share. Norm Mast, host of the longest running folk music program in the country -- The Back Porch (WVPE) -- was manning one of the grills. Everyone pitches in. 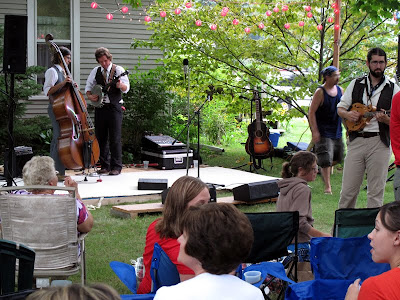 I've got to admit it...I was shocked. The trio was as tight and musical as any band I've ever heard. I don't think I'm exaggerating. And I'm not "grading on a curve". I've seen some really great bands -- Rani Arbo and Daisy Mayhem, The Duhks, The Steeldrivers, just to name a few.

I guess I was shocked because....and now I'm going to sound like a crusty old man....I've heard about Goshen local, Jay, since he was young. And I suppose it's that "A prophet is without honor in his own land" thing showing itself in my thinking, but (sad for me to have to admit) I didn't expect so much from a local.

Jay has always been a great musical talent. I've even had the pleasure of playing with him on a few rare occasions when he made it to local jams, or I've run into him at Wooden Music. He's a humble, kind, and friendly gentleman as well. I think that spirit -- that nature -- shines through in his music, making it even more winsome.

But now I've watched as he has grown further into a tremendous mandolin player and an even better musician. The band played with such maturity. I can't recall hearing a band that utilized dynamics as well as they do -- often playing quietly and demanding your attention quite successfully.

Jay intuits -- as well as anyone I've ever heard -- how much the slightest bit of mando can add to an arrangement. Oh, he can burn it up too. But I've seen mandolin players who can do that. Lots of them. To his musical credit, Jay plays to the song -- and your enjoyment -- instead.

And his tone on that mandolin is incredible. Clean, articulate, round.

The trio had everything required to be entertaining -- especially great vocals. They did a few a capella numbers that brought down the house. Generally, quite often as skilled as those fellas were on mandolin, guitar, and bass, the instruments were often more utilized in service to those great vocals.

They're going to be playing in Goshen again this Sunday night, October 10 as part of the LVD's music series -- though this time around the concert will be at the Goshen Theater. If you are reading this post and you are anywhere near northern Indiana -- Fort Wayne to Chicago, Grand Rapids to Indianapolis, I highly recommend the concert. You won't be disappointed.