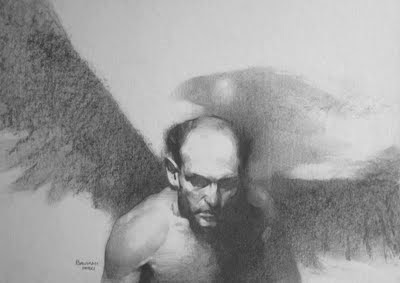 He looked off to his right wing -- that’s where he felt something give. A bit of wire mesh showing through. Bared of feathers, the glue had fatigued from furious flapping.

Flight never came easy. It was about to get a lot harder. Like the fast approaching ground. Real hard.

It was pretty clear from the start. He was no bird. But he was resolute: The only way he’d never fly is if he’d never try. And he was full of try. And that heart-pounding second when his feet first felt nothing beneath them but air, and his homespun wings found purchase through the morning mist – rising, rising – was a beginning.

It was borrowed glory. A stolen gift. He need only witness the avian spectrum from hummingbird to hawk to know that neither and none of their grace would be his. He’d neither be capable of the craft of the acrobatic industry that is the hummingbird’s mystery, nor the artful mile-high effortless soaring of the red tail. But he would fly. For a long way and a long time. Not high, but higher than groundlubbers. Not fast, but ever forward.

The birds thought he was crazy. His friends knew he was. And now, with the feathers falling away, leaving him holding fistfuls of handles and little else, and a fast approaching Earth, he was maybe seeing their point. But the thing about cheating nature is that funny little paradox into which we’re born: It is our nature to cheat nature.
Posted by John Bauman at 6:52 AM