The US Post Office changed from three-letter (Fla) to two-letter official State abbreviations, and suddenly Freddy "Boom-Boom" Cannon's once ageless masterpiece "Tallahassee Lassie" is a dated bit of oldie-ness, the song's heroine now and forever stuck down in EFF-ELL-AY.

Well, I just got in from EFF-ELL-AY. I wasn't sure I was going to make it -- at least not easily. I had a tire blowout on the way down to Florida, and weather concerns on the way up. Just a couple of counties over from here, they have 2 feet of snow on the ground, and more than that where the snow's drifted. But as I drove up through the center of the State last night, the roads only got better further and further north.

I spent the past weekend in the Tampa Bay area as one of the guest potters at the "Tour De Clay". My gracious hosts for the weekend were Glenn and Keith "The Pottery Boys" Glenn Woods is a talented, hard-working potter who is just a touch passionate about crystaline glazes. It was an interesting world for this functional potter to step into for a few days. 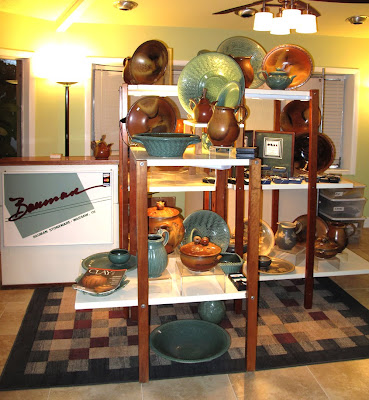 Because I was part of the tour, and because of the distance between the participating studios, I didn't get to any of the other venues. I did enjoy catching up with a few potters with whom I've done a number of shows up in the midwest -- Ira Burhans and Peter Streit. I also had the pleasure of meeting Danny Meisinger. I'd done a few shows with Danny in the past, but we never got around to meeting while at those shows. Danny is known for his monumental-sized pieces and he's been conducting workshops around the country, in addition to the few art fairs he still manages to schedule. I'd highly recommend taking in a workshop, if not at least stopping by his booth at an art fair. Not only is the pottery a wonder to behold, but he's an extremely winsome soul.

Adding to the weekend's fun: I met fellow blogger (and now Etsy-seller), Linda Starr. It was a pleasant surprise -- she didn't know I was part of the tour, and I didn't realize she was in Florida. We talked for quite a while -- pots and Etsy, Etsy and pots. She's obviously another pottery zealot. Heh. 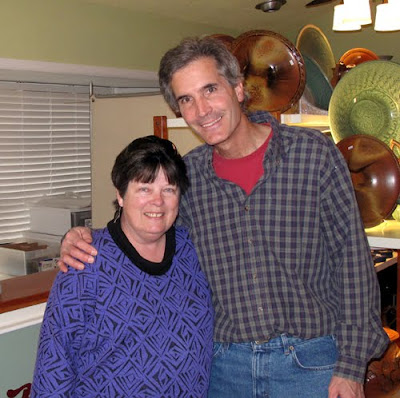 Today as I recovered from the travels, I spent time uploading some pottery to my etsy site: 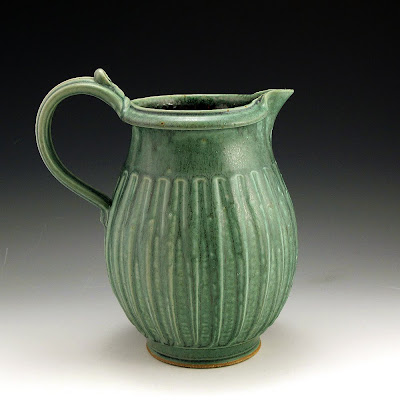 This is the very pitcher about which I blogged here and here. Just as an aside, this is one reason I enjoy my relatively small gas kilns -- I like the fact that I can see a pot finished relatively quickly. I can see the finished product while the inspiration for the direction I took with that pot is still fresh in my mind. That's no small advantage in successfully executing rapidly evolving pottery ideas. 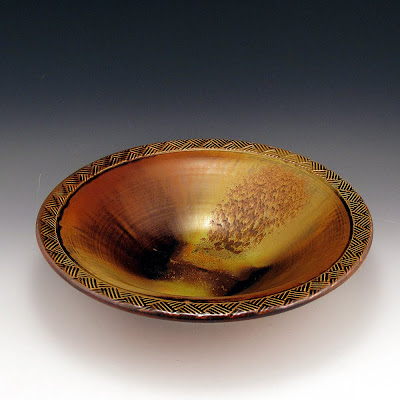 In the Winter, I often put these bowls in hotter firings. I get a bit more contrast -- more inky black edges and lines -- and the waterfalls of rutile gold travel a bit further, pushing an almost bluish hue ahead of them. 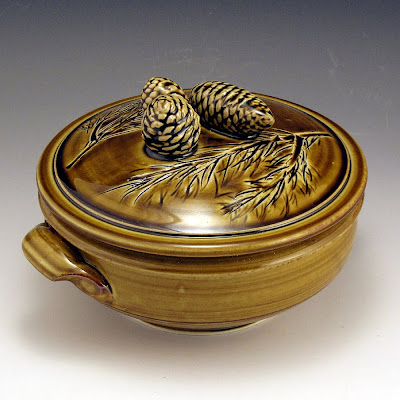 I also had one more of these pinecone-topped casseroles. They are prototypes of things to come, but I was exceptionally happy with the way they came out, sporting this caramel-colored celadon glaze that highlights every last detail of the intricate pinecone and pine bough decoration.
Posted by John Bauman at 3:50 PM