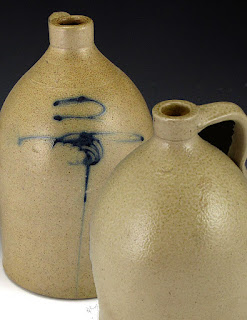 This is how the ebay listing reads. (I share it here 'cause it's a pretty good story):

I don't mean for this listing to be confusing, but the images are of two different but nearly identical jugs. One has the blue "2" Bee-stinger decoration and is marked with a large "M" at the back of the base. The other is plain and unmarked.

Obviously they represent the work of the same pottery -- the same shape, the same lip, the same color clay, and the same perfect, luscious salt glaze. That's one reason why I want to sell them as a pair. I could no sooner break them up than I could send twins off to live in separate homes.


Neither have chips or cracks of any kind.

The one with the blue decoration: I was walking out the door of an antique store on highway 12 in southern Michigan when I noticed a man carrying the jug toward the door I'd just exited. The jug was only distinguishable by the shape. There was absolutely nothing of color or decoration visible through the thick layer of barn dirt that completely covered the surface. It was a dull, oily, thick, grey-brown.

But I knew what it was. I couldn't help myself. I asked the fellow what he was going to do with the jug. He said he intended to go into the antique store and see what they'd give him for the jug.

I gave him a price right then and there. I waited outside in hopeful anticipation of what I knew would be a strong probability -- my offer would be better than the store's.

I was right. I handed the man my money and drove home with the jug in my truck. When I got home I cleaned it up. As the grey-brown washed down the drain and the brilliant blue began to appear, I knew I had made one of "those" purchases -- the buy of a lifetime.

Many years later I came across the other, plain jug in the loft of a collector. I knew I had to have it. The two jugs belonged together.

They still do.
Posted by John Bauman at 5:50 AM