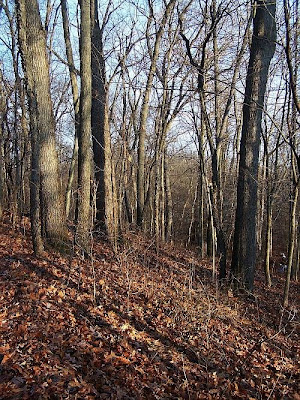 The colors in a late winter woods are incredible. Like no other season. A drive by doesn't reveal them. You have to walk into the woods to see that winter isn't just brown.
Walk one direction up the trails and you'll find that every large trunk that faces you appears to have roadside signage -- those signs all being shapes made of moss. In the summer you may never notice that moss because the more vivid shades of leaf green draw your eyes away. But in late November those moss-signs stand out as though every tree trunk was carefully patina-ed with oxidized verdigree copper.
There are two trees right now that have bright red berries. Actually, one a small tree and the other thorn covered bramble interspersed wherever the woods thins a bit to allow more light.
The winged euonymus is still holding on to the last of its now dangling, dusty rose colored leaves -- though their almond shape is now facing up and down rather than horizontal.
And there's still one tree out there that is as green as springtime. I don't know what it is.
Sure, there's lots of brown out there too. But when you're in the woods it's not brown. When you're in the woods it's sepia, and umber, and siena, and chocloate, and buckskin, and tan, and everybrown in between.
Posted by John Bauman at 6:26 AM