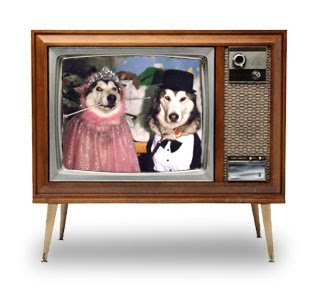 "Can you turn that down!? " Eve said from across the room.
Ed gently leaned his guitar against the wall and made his way over to the TV. But even as he bent to adjust the volume control...

Muttering to himself, "For every commercial I've endured - many over and over and over.... - and always at that annoying heightened volume level to make sure I can hear it from the kitchen with the 'fridge door open! Always telling me of the wonders of the latest product that I need to make me happy -- I've bought 'em.....they didn't.
And with that, he reached around behind the TV, and with a jerk on the cord, pulled the plug on the set.
That felt a little better.....but not much.
The TV was quite an armful as Ed hefted it up from its stand. With a few grunts, and opening doors with a shove of the hip, he finally managed to get the thing out to the garage workbench.
A plan was brewing.
He looked around the shop for some rope but finding none, his eyes rested on the 50 ft. orange extension cord hanging from the peg rack. "That's appropriate." says he.
With great deliberation, as one might put into a ceremony, Ed proceeded to turn one end of the extension chord into a noose. After trying every which way to get the noose to stay put around the TV, he finally found that he could kinda wedge the protruding picture tube from the back through the noose twice and, with the TV entirely circled with cord, it was now secure.....enough.

Ed, by now sweating just a bit with the labor of it all, hauled the huge TV into his large back yard and half set, half dropped it on an old wooden chair at the foot of a big old oak that grew there. Throwing the loose end of the extension cord over a big branch, and then securing it to the tree trunk, he said, " ...and here's for every mindless PSA re-informing me either what I already learned in kindergarten, or what common sense taught me almost from the time I could first talk. I don't need some Government or corporate expenditure to remind me of the obvious --- and God save me from the TV viewers who do!"

And with that he kicked the chair out from under the TV and left it to dangle there - hanging until dead.
.....except it wasn't dead, and Ed knew it. And Ed wasn't through...
...the TV didn't know that.
Ed pulled on the extension cord to raise the TV up a few feet. He then walked over to the nearby firewood pile and got a few armfuls of kindling and wood and stacked it under the dangling TV. With one more trip to the garage for some kerosene and matches, he was now prepared to finish the task.
As he lit the match to throw on the kerosene soaked wood pile, he shouted, "And for teaching my kids to, like, talk, like.....whatever...." he said in his best adolescent impersonation (which admittedly wasn't very good). "I'm not going to take it anymore! This is for teaching a whole generation of over sexed, over violent, over entertained youth that there's no difference between smart and smart-aleck........but infinitely worse, that there's no difference between fame.....and infamy!" he said. And with increasing anger in his voice he continued, "And for choosing your right to speak over the good judgement to shut the hell up from time to time!!".
As he watched the fire slowly disfigure the plastic parts as they curled and buckled slightly, he felt moved to be a little more active in the TV's demise. This watching thing was too passive. Ed retreated to the house and quickly returned with his 12 gauge and upon loading the single cartridge into the chamber took aim. As he did he shouted, " ...and for stealing the reality of life and replacing it with spectating! For every game watched...and not played. For causing me to forfeit my own creative potential - as well as the potential of my own creativity - to the expression of another's.....way too much of the time!" At that, his shoulder was kicked back with the force of the shell blast. And the glassy screen of the dangling TV all but disappeared, leaving a jagged crown in a mal-formed plastic frame.
But Ed was just getting warmed up.
He untied the TV from its mooring on the tree trunk and with a few swings to put it wide of the still burning fire, he let it fall crashing to the ground. He then dragged the TV carcass, cord and all and tied the cord to the bumper of the old pickup truck he used for gathering firewood.
He still had some things to say like, "For the Sunday morning talking heads who parade their professional liars week after week, giving them a forum for their manipulations until meaning has lost all, well..... meaning! And for foisting your pretty-boy political candidates on a public too ready to listen with their eyes....catering to people's desire for a symbol not a substance, an image rather than a reality!" This he shouted out the truck's open window as he proceeded to drag what was left of the TV behind the truck, over the uneven ground of the pasture behind his house.
When the extension cord noose finally let go of the TV, and the TV came to rest appropriately on a pile of cow manure, Ed slowly drove back to the house, and parked the truck. He then walked back in, calmed and refreshed, picked his guitar back up and started playing again.
“The guitar…” said Eve. “I was just wondering if you could play it a little quieter.”
Posted by John Bauman at 10:36 AM

Email ThisBlogThis!Share to TwitterShare to FacebookShare to Pinterest
Labels: No Television