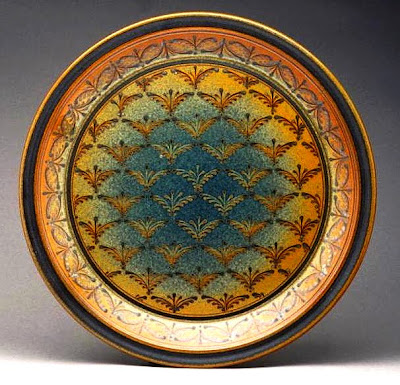 It’s funny, the way that Mark Nafziger first came to my attention…
For the first several years of my pottery, I operated pretty much as an island unto myself. I had very little education in clay, and I didn’t subscribe to the publications that I could have. I was mostly just trying to make a living. And sadly (I must admit), since I’d chosen this path of isolation I was destined to spend an inordinate amount of my time “re-inventing the wheel”. So I was pretty well preoccupied.

But the one constant from my early years until now is that I’ve always decorated with slip – brushing, dipping, trailing, stenciling, masking – everything slip. Well, my self-imposed isolation, coupled to my use of slip, had me thinking naively that I’d actually “invented” feathering. I hadn’t seen it done. I’d figured out the technique by simple trial-and-error. Thus, I concluded it was just something I’d “come up with”.

Then one day a friend from Bryan, Ohio took me to dinner at Sauder’s Restaurant in nearby Archbold, Ohio. Imagine my surprise -- as the inventor of slip-feathering – to be looking at a table set with pottery decorated pretty much as it would, had it come from my shop. The cream and sugar set at the table was a pair produced by Mark Nafziger. And those pieces had feathered slip decoration banding their circumference.

The museum grounds of Sauder Village were closed that evening, so it turned out to be several years before I ever actually met Mark. But I never forgot the name. And as I asked around the circle of potters I did know, I soon found out that we had a number of common acquaintances. (Those common acquaintances are someday going to be the subject of another VERY lengthy post!) 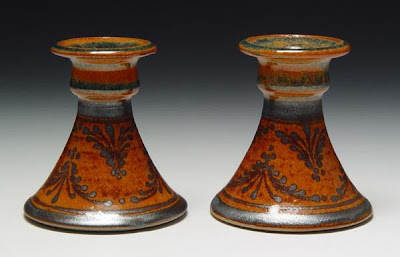 By the time I finally did acquaint myself with Mark he was doing some of the finest pottery, decorated with THE finest slip work imaginable. Mark is a craftsman of the highest order. He does so many clay things well. And his decoration is so breathtaking that it might be easy to overlook some attention to other details Mark puts into his work. 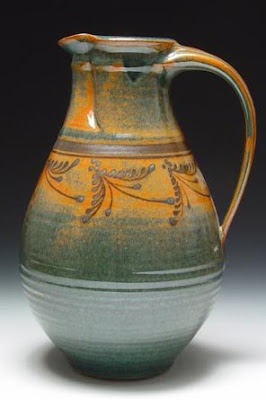 One aspect of Mark’s clay work that I find fascinating:

Shape is an interesting thing. It’s relatively easy to come up with a strong thrown form by sort of “letting your yea be yea and your nay be nay” (to quote the Good Book). That is, it’s easy to make strong forms if you’ll sort of divide the piece into its natural anatomical parts and then make each of those parts fit very committed silhouettes -- arcs, straights, cones, etc, and then watch for pleasing proportions.

But the thing Mark is capable of doing (something I find amazing) is taking a more vague shape – not strictly geometric -- and yet making that shape committed, strong, identifiable, AND something he can duplicate. Something as simple as one of Mark’s mugs is such a signature shape – simple, subtle, elegant, and immediately identifiable as uniquely his – even though not geometric, nor simply divided, committed silhouettes

Mark’s been much published. It seems most of what people say about him ends up coming back around to discussing the precision of his work – and that usually written with some mention of his math background (The other part of his academic training). That precision is noteworthy, praiseworthy, and (as Breeze would say) “stuff”.

To me, what’s more amazing about that precision, though, is not the implied difficulty of execution. Yes, I can certainly appreciate that. No, to me what’s remarkable is that in the final analysis, Mark’s work has become animated by that tight control to such an extent that the process has itself become transparent. The decoration serves the piece’s unified whole rather than merely calling attention to itself as a “show”.

But even after all of those considerations, it was a very simple thing about Mark’s work that so strongly influenced me. Mark and I both make shallow bowls – bowls so shallow that essentially the backside is more like that of a plate than a bowl. And as such, I hadn’t really considered decorating what is, for all practical purposes, not seen – the back of the bowl.

Then one winter Dar bought me one of Mark’s bowls for a gift. It was decorated on the back. It was just so … right. That detail disclosed to me a guy who loves what he does so much that he – from all appearances – was pleasing himself by decorating what mostly only he would have seen. It showed a craftsman whose mind “good enough” would never even cross. How would he answer, “Well, who’s going to see that anyway?” The simple, obvious answer is: “He would.” 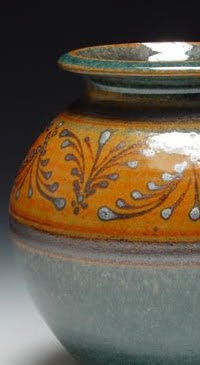 I’ve decorated the back of my bowls ever since. Oh, I’ve got a few decorating techniques that literally don’t allow me to do much decorating there – but even then I always try to figure out some means of expressing myself on the back sides of my shallow bowls. 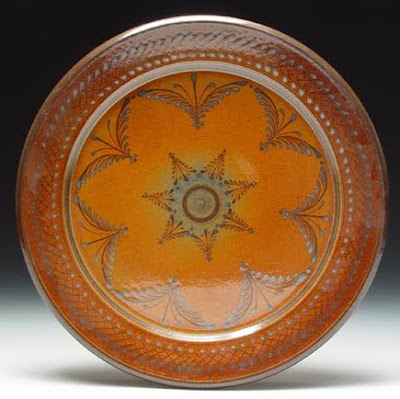 His work is available through Bier Gallery or Charlie Cummings Gallery